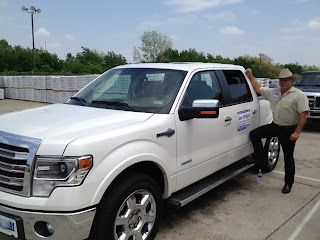 We roofers, from installer, through salesmen, to company owners, buy a lot of trucks. We live in our trucks. Most spend more time with their truck than they do with their significant other. So the decision of what to buy should be made carefully, right? Nope I tell you. The decision has been made for you. Here's my story about the new space truck I bought from Westway Ford in Irving:

As all diligent buyers I did my homework and asked a lot of questions. I familiarized myself with all the available options. Now I'm a Ford man and always have been. Some will quit reading because this is as close to politics and religion as a man can get with other men.

When I announced my intent to buy a new truck all my gym buddies started filling me with information and extolling the virtues of their trucks. Everyday for two weeks they'd ask me if I has made a purchase. We dudes are worse than women buying handbags on sale.  "For crying out loud. I'm taking my time because this is where my bondoons will nestle for the foreseeable future."

As my GAF Senior Territory Rep, Kenny Brock, would say "be sure and check out the GAF/Ford plan. I've heard good stuff about it from the Master Elites who've taken advantage of it." He would check-in periodically and ask me to tell him how it went and remind me of the GAF plan with Ford. He too was a hand bag shopper.

The big day came. I sharpened my sword, put on my armor and went into battle. Forward I marched onto the  dealer lot with my internet data, Edmond's True Pricing Report and my GAF X Plan from GAF and an experienced assistant to hand me my weapons.

The salesman greeted me at the door with a practiced smile and led me into the torture chamber. Soon a more experienced warrior arrived and we began the debate. Pens sparked against pen and fake smiles penetrated the battle. The first salvo was MSRP, a weapon used against the simple minded to think that a few grand off is a good deal.

The Ford soldiers went back and forth and got secret new deals from master control. One of them shuttled back and forth bringing "set in stone" pricing. Then we pulled out the Edmonds rapier. They continued with the same battle plan, ignoring the so called expert in pricing. Edmonds said $38,018, counting the rebates and discounts for a Lariat but not the King Ranch.

We went outside and I saw a one color pearl King Ranch. It was the color I wanted but was told King Ranch only came in two tone. It was love at first sight and I knew I had to rescue the damsel. She was prettier than the Lone Ranger's horse. I was consumed like a schoolboy but managed to contain my glee.

After failing to bring the kidnappers down I pulled out my GAF/Ford X Plan. The opposing warriors slumped and asked why I hadn't just showed them this earlier. Their hands were tied. They said they had to honor the pricing. I could see their commission checks leave their body like a soul from a fallen warrior. I looked into their eyes and listened to their Klingon death scream. We won.

This truck is all business. It is a Texas Hot Rod Lincoln. With the twin turbo it is almost as fast as a 12 cylinder Jaguar I had years ago. The moon roof ( in Texan it is a sun roof and in Spanish it is a coconut burner or quema-coco), electric rear cab window, giant back seat,  heated and air-conditioned seats in front and back, GPS, Bluetooth,  Rich King Ranch Texas leather, Sony sound system better than the system in my home, Sirius Radio, navigation, backup camera, side steps for the sides and tailgate and beautiful wheels with Bridgestone tires make this the best and most beautiful truck I've ever owned.

After two guys at the gym saw it, I had new nicknames: Jon "white truck" Wright and Jon 'King Ranch pearl truck" Wright. Even those who had the 4x4 diesel F250's said my truck was better even though their MSRP was 10k more.

I have found love again in a man's handbag.

Posted by The Roof Forum at 9:12 AM No comments: