We did our first home show in years. Keith Lyles from Classic Superoofers, Billy Ellis Aluminum roofing, and some other roofers were there.
The people were nice and the booths on either side of us were real nice.
our biggest drawback was I forgot to tell my men to ask the curious to sign in. They mostly just passed out cards and explained ventilation. Hopefully the Dallas people have great memories because I'm sure the other roofers got them to sign up. Keith was unique because he had worked for almost everyone at the show except for DFW Roofing. I believe they are from Houston. Does that make sense?
We were the only Master Elite at the show but we were showing Gerard stone coated steel tiles and shakes.
Don't read below. It is an SEO experiment. Maybe Google will get mad but I'm a computer moron. I just learned how to turn one on a couple of years ago but I'm one heck of a roofer. 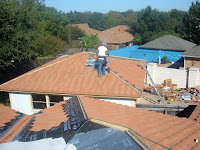 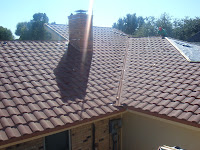 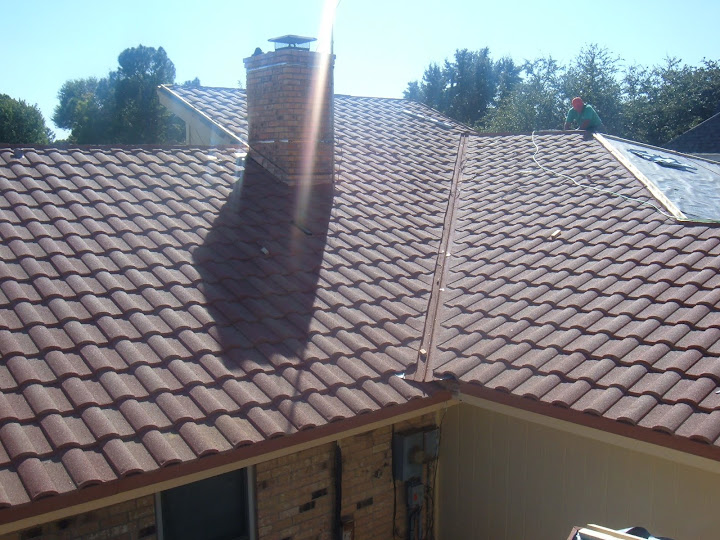 When a Roofer Knocks on Your Door

When that storm trooper knocks and needs an answer now, the answer should be "NO!" There is no urgency and there is a tomorrow. Otherwise, don't open the door. The roofing companies in Dallas and Fort Worth will keep on knocking no matter what you do when there is a hail storm.

So what if prices are going up? The insurance companies have adjusters who do just that: adjust numbers. They almost never get it right the first time and they will change the numbers when a proven professional contacts them with the proper documentation. That's why its called a "settlement". That's why adjusters are constantly adjusting numbers.

So what if they are going to get real busy? You have up to two years to get the work done, in most cases, and there are always extensions available from the insurance company. Besides it might hail again and you can only change your roof so many times before your decking is frayed.

So what if you might have a leak or your skylight is broken? Your insurance company will cover the full cost of temporary repairs but they won't cover damage from faulty workmanship.

Do your homework. Select the proper roof system for your home irregardless of what you have on there now. Just because you have a 20 year three tab doesn't mean that you need to worry about buying another cheap roof because that will cost you a lot of money, of course, unless you plan to dump the property on some innocent soul in the near future. As I reiterate through "The Roof Forum", a roof can save you money on premiums, energy consumption, HVAC repairs, health, sanity and resale. The proper ventilation; the wind considerations for nailing patterns, felt options, starter, and weight; class IV UL 2218 impact resistance rating for premium discounts; warranty length and enhancements can add up to beaucoup money.

If you don't want to replace your roof when you sell your home in ten years, have an uncomfortable and energy INefficient home for your time incarcerated there, repair or replace your HVAC any sooner than necessary, have sick asthmatic kids, replace your insulation, have radon gas in your home, have carbon monoxide poisoning, paint your house more often, replace your roof deck, have roofing blowing off, and whatever else I have forgotten, like divorce, don't select a roofer on your front porch. Ask friends and coworkers. Look at manufacturer sites. Study. Familiarize yourself with the products and the companies. Options, options, options... People in a hurry can't do this and the ones hurrying you don't want you to do this. Sleep on it for a couple of weeks or months.

If you want to decide so that the other homeless roofers will stop knocking on your door (as if a yard sign will be like garlic to Dracula) you are mistaken. When you sign up with Nosferatu his minions will continue to pester you. Dracula may be in your home right now. And if you don't want to go through this again, buy a stone coated steel roof and be done with it.

By the way, Harbor Freight Tools sells tarps real cheap. They might be better than the cheap roof you have thrown on your home in a haste. Just be careful. There are plenty of good roofers out there. The guy knocking on your door is probably not one of them. He probably has no ideas of what I'm talking about, the blood sucker. Just remember to take a deep breath, wait a few moments, and them put up that no soliciting sign and hope the night demons can read English and have respect for our laws. The roofing companies in Dallas and Fort Worth will keep on knocking no matter what you do when there is a hail storm. So why not get a permanent steel roof... or a gun?

When improving your home you want to make sure to cover all the bases. Imitate large corporations, not the corrupt part, by setting forth minimum standards. Insurance, Better Business Bureau rating, years in business, and local references, old and new. You might want to check for certifications from manufacturers and trade organizations. If the company uses a salesman, check for his own customer references with the company too.
After narrowing down your field you can give a quick look at the prospective websites for clues as to the overall integrity. If their Google comments seem fake then an ethical key is missing. If they trade on the cross, they are probably crooks. In today world there are too many religions to be picky. Anyway a good Christian won't usually tell you he's a Christian unless he's asked.
Try putting the salesman's name in the Google Search Bar with the trade he's in next to it. For example, you would put my name, Jon Wright, with roofing, or, for that matter, killer. It doesn't hurt to snoop. Call supply houses at random and ask about the companies. All they usually know is that the business in question pays their bills or not.
Compare apples to apples. Don't be afraid to ask questions. If the company is difficult to reach now, it won't get any better later. That's an understatement.
Make sure your name is placed on the general liability insurance as a rider, just like your kid is on your auto insurance.Don't give large deposits until the materials arrive and work has begun. Don't pay the final bill until you've looked the job over. Make sure all aspects of the contract were covered. Check the clean up around, under, and in the job.
Or you could just let the manufacturer pick for you by using their preferred contractor. The problem with trade organizations is that many just take money and do not report on their members. The BBB, Angie's List, and a few others do keep record though.
Lastly, use your gut. If it feels wrong it probably is.
I'd use a combination of the Dallas Better Business Bureau for Dallas roofing companies, the GAF website for Master Elite Roofers, the Metal Roofing Alliance, and the National Roofing Contractors Association, NRCA, as my starting points for roofing companies. For siding their is the Vinyl Siding Institute, VSI, and the Better Business Bureau.
There are so many roofing contractors in Dallas and Fort Worth that it is the only way to narrow down the scope. Roofing in Dallas goes crazy with all the out of town roofers, who also keep a listing so as to seem local, that if you are not careful you'll choose a carpetbagger.