Reusing Metal Edge on Gable Homes Is against Code.

I'm going to prove that if you have a gable home the insurance needs to replace your metal edging.

The International Residential Code governs how municipalities write their building codes. The cities adopt the codes and then make addenda for their particular needs.

Here's their recommendation for flashings:

That's it. The baton has been passed to the manufacturer.


Here's what GAF says about felt.Underlayment:
Standard Slope–4/12 (333mm/m) or more
Application of underlayment: Cover deck with one layer of underlayment installed
without wrinkles. Use only enough nails to hold underlayment in place until covered by
shingles. Application of eave flashing: Install eave flashing such as GAF-Elk Weather
Watch®, StormGuard®, or other GAF-Elk Leak Barrier in localities where leaks may be caused
by water backing up behind ice or debris dams. Eave flashing must not overhang the eave
edge by more than 1/4" (6mm) and extend 24" (610mm) beyond the inside wall line. 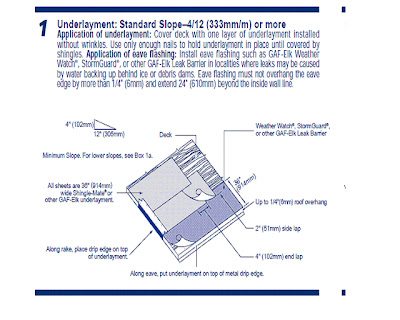 Here's what many insurance companies are saying: We're not paying for metal edge because it's not damaged. Translated that means they're not going to pay you enough to replace your roof correctly, so that your eaves don't blow out or your home doesn't pass inspection. And if the product fails early this is one of the caveats the manufacturer can use to deny your claim.

Don't settle for less that right. The flashings need to be changed or you don't have a new roof, you just have a badly repaired roof that will haunt you.

All the good roofers have been arguing to no avail with the insurance companies about new metal edge. They don't want to pay for new metal edging. Everyday of every year they look for a way to dumb down the roofs. "I've had it. I've had alls I can stand and I can stands no more." I've eaten my spinach and I'm coming out swinging.

http://www.google.com/search?q=felt+metal+drip+edge&ie=utf-8&oe=utf-8&aq=t&rls=org.mozilla:en-US:official&client=firefox-a
Just read a few of the links on the page I've pasted the link for and you'll see uniformity from everyone that the felt must go under the rake metal edge. No exceptions. GAF, Certainteed,  NRCA, RCAT, and anybody who's anybody agrees.
You can't put the felt under the rake metal without taking it up and then it is full of holes and all bent up. So if we follow State Farm's procedure and the home inspector for the buyer of your home catches it, you will be forced to correct it, maybe even replace the roof. I certainly wouldn't buy a home with the metal on the rakes over the metal edge. This is an installation violation that may void your warranty, besides water rot and paint being messed up.
Now for the kicker. The International Residential Code, or IRC, which governs how cities enforce their building codes, says that the manufacturer's specifications rule here. Here's a video from GAF
http://www.youtube.com/watch?v=wPTec_tIyCQ
Point made. Let's make the insurance companies replace your roof right.
Jon Alan Wright
Jon Wright Roofing, Siding, and Windows
1915 Peters Rd., Suite 310
Irving, TX 75061
972.251.1818 Office
214.718.3748 Cell
972.554.8090 Fax
jonwright@jonwrightroofing.com
www.jonwrightroofing.com

Posted by The Roof Forum at 7:59 AM No comments:

Just who is an Irving roofer? There are about five of us who were operating in the city prior to the storm. The most active were Scot Horton's two businesses, Moore Roofing and Construction I believe and Evans and Horton. I never met the Evans guy and doubt his existentialiality. Robert Murphy worked for Mr. Moore for years and paid him too little, as was his nature. He promised Robert the business but when it was time to sell it he offered it to his two sons who wanted nothing to do with it. You see, they were his roof slaves as little children and learned their lessons and became some sort of engineers. I met one on a roof one day. He looked around and said" what am I doing here?" He left.

I warned Robert that Mr. Moore would not honor his verbal agreement and Moore didn't. Robert's last laugh was that he had his own phone number in the Yellow Pages add for after hours service. He just took the jobs. Plus a lot of the customers called him because he was the only field contact. Scott Horton has a salesman or two.

These two companies are pretty good guys but we have an edge. We are Master Elites. I believe Scott has renewed his Certified status after letting it go for a few years.

Adela and her boyfriend started their company a few years ago, American Roofing and Siding, and have done well chasing storms all over the country but have pulled in the reigns to their homes here in Irving. I always found it a little funny that a couple of Mexican immigrants, who are full fledged Americans and live here, call themselves All American. Sometimes the convert is better at something than those branded early in life.

All these Irving roofers are pretty good but might be a little weak in the balanced ventilation area. They are definitely better than the invaders.

I've seen some other names now and then but I don't know them. Of course I'd prefer you used us but if we can't get to you then I recommend one of them rather than one of the carpetbaggers. At least you'll keep the money here in Irving and if you have a problem they'll be here to take care of you.

So let's here it for the Irving roofing contractors. Protect yourself and make sure the roofing company is from at least 20 or 25 miles away. Otherwise you better know them well. You can investigate through the BBB, but that is not as good as it used to be. Don't just look at their rating but at the number of complaints. Angie's List is a great resource. You should join before you pick a roofer and check out what his customers have said about him. Also make sure the roofer is certified in the product he is installing on your home. The warranty is soooo much better. It goes from a prorated material only warranty to a 100% material and labor for 20 years on 25 year product and 50 years on lifetime. You'll never need to pay for a roof again.

Check on insurance too.
Don't use a canvassing carpetbagger. If he was any good he'd be buried in business. And don't get in a hurry. If they need an answer now the answer is no.

Posted by The Roof Forum at 8:16 AM No comments:

OSHA IS BACK JUNE 13th for Roofers

Starting June 13th the regulations that were suspended fifteen years ago are back. The small things like drinking cups, hospital locations, and bailing wire on extension cords are not the big one. Fall protection is.

The 120 new enforcement officers for OSHA will certainly descend upon Irving due to the massive hail storm and easy pickings. Sure they want the money but that is how they teach:fines.

The conundrum is the safety harnesses that keep roofers from falling make the work much more difficult. Imagine trying to tear off roofing with a lasso hooked to your back that keeps getting wrapped around pipes, chimneys, skylights, toe board brackets on steep roofs... and your legs. These guys are going to trip and stumble but they won't get killed in a fall. They will fall a little more often but die less often too.

In 1995 we complied with the rules and purchased the equipment. The roofers would put all the protection in place and then not hook the rope to their backs. Many roofers went next door to roof for the guys who didn't enforce the ruling. Chaos reigned and costs soared.

We invoiced the insurance companies for more and they went out and took pictures of the guys whenever they released the hook. If only for a second the y claimed the provisions were not being followed.

Anyway, the fights begins between myself, the roofers, and the insurance companies. I just don't want to fight OSHA, because I won't win that one.