Photons, photons, everywhere and not a solar panel in sight. How about "it's raining light and summer has finally started."
Why aren't we, as Americans, doing something about this. There's enough energy falling on the earth everyday to power us for a couple of years and enough landing on your roof to save you a bunch, a technical term for something that will change your life.
Not only will you spend less on your light bill, you'll save the planet too.
We are roofers and have been roofers here in Dallas Fort Worth for 31 years. We have lifted millions of pounds up and down roofs from Graham to Texarkana and from San Antonio to Oklahoma. In Carrollton alone I could bet we have removed and replace one billion nails on various roofs. In Plano we have installed several trainloads of radiant barrier decking. In Arlington Texas we have fastened 50,000 stone coated steel panels. In Southlake we've loaded tens of thousands of bundles of shingles. In Grand Prairie we have fastened thousands of panels of vinyl siding to walls. In Irving we have removed enough asphalt roofing to fill a small landfill. The shear tonage of concrete roofs we have torn off could make a locomotive strain.
What makes anyone doubt that we are not the ones to load solar panels on your roof, secure them to the roof, and route the harvested electricity into your home an 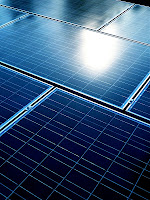 d out into the grid without causing a leak or breaking something.
With the use of a solar calculator and a pile of your old bills we can scientifically figure how much harvesting you need to do.
Whether you buy solar equipment now or later you are going to pay for it. If you do it later a lot of those photons will escape to never never land. If you do it now you can save about $16,000.00 worth of tax incentives and Oncor rebates that may disappear. You'll also increase your home about $20,000.00 in value if you save $1000.00 in electricity annually.
Remember that good panels don't have plus or minus ratings. The minus means that they might lose oomph and the solar panel chain is only as strong as its weakest panel. Good panels have guarantees that stipulate how much degradation will occur to the panel over the next 30

years. We have a German panel that is guaranteed to hold up to 80% of its juice for that long.
We also have solar shingles, photovoltaic laminate, or PVL, that can be adhered to standing seam roofs.
We are the one. We can roof your home and install a solar system of your own so that you can be a Master of the Universe. From your high perch you can stop the oceans from rising, the planet from heating up, cure children respiratory diseases, and save a little money to boot. But the priceless part is going to a cocktail party and telling everyone that you are the greenest one in the room. Realtors will love you too.
When the lights go out you'll be Mr. Cool. If they go out permanently you better be able to defend yourself from Mad Max's enemies.
Why wait? Solar savings is a great place to bank.
www.jonwrightroofing.com
Posted by The Roof Forum at 8:36 AM