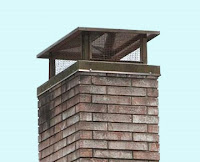 I did it. Normally my chest is not thumped by moi, like that of a Great Ape in an auto-narcissistic thump . I don't even sell my business here. But I wrote the Great American Roofing Novel the day before the last annual hundred year rain. Sure it happens only once in about three years but who can sell newspapers, or whatever the young buy today, if the hundred year rain only happens every hundred years. Nevertheless it was a doosey.
What I'm referring to is the slow leak of the washed out chimney. The callers were in the dozens. Those chimneys haven't leaked in years even though they have been repaired or the roofing around them has been replaced. Yet the same leak returned. There is a madness in reason. It's called logic.
Let's dwell.

The chimney leaked in the same place even though all the other variables around it have changed. That leaves the chimney itself. The chimney is leaking and no matter how much you repair the roof, it will continue in its dance of destruction.
The water is migrating from the surfaces of the masonry, mostly the top or the gaping holes that were caused by 25 years of erosion, into the flue, onto the same place on the sheetrock it did ten years ago, or down the hall. Twenty years ago the deceased previous owner experienced the same occasional wetting. Ouija it it you must.
Put a tarp on the chimney and wait for a rain. The tarp will not influence the water on the roof plane but the magic water on the elevations above the roof will be diverted to the roof. Sans goutte à goutte, or for the more nerdy amongst us, vaccus lacrimo.
I told you. I told you. And if I haven't, well, the tarp on the chimney just might stop the water in the house. This tarpaulin does not stop roof water. it stops jerk-off builder water. He left the home defenseless from normal anticipated wear and tear. He knew it. He is rich.
You are getting poorer.
Around the world homes are built of concrete and roads are built of brick. America is reversed. You think you have a brick home but you do not. It is a veneer. And the chimney is an empty monolith capped with a piece of plywood.
Do you think the Great Wall of China has plywood on top with a mortar mound? Do you think the great buildings of our world use plywood to protect masonry? Imagine the great castles of the world having plywood as the first line of defense against the erosion of time and rain.
This loose amalgam of mortar and broken bricks, cans, bottles and mortar (see previous blogs) may look solid but it is not tightly fitted stones cemented together.
These chimneys are American. Like everything else here they are disposable. Every hundred years all new people but every 25 years all new chimneys unless you builder proof the haphazard amalgam of trash that the craftsmen filled the chimney with while cleaning the job-site.
Who would have thunk? They not dat dumb?
Evil? At least inconsiderate and lackadaisical. No evil. When you get the bill your fairly forgiving and enlightened mind will be bent toward a different arc. Welcome to the human species. The masons have drug you to their plane.
Too bad I couldn't have bet all those people I told that if they didn't get a chimney cap they would be sorry. Too bad we didn't tell everyone with these lousy chimneys to consider a full hip roof chimney cap with bird screen.

Commercial break
(If you read previous blogs you'll know that the chimney cap in the picture is installed wrong. Anybody guess why that cap will blow off. $100.00 this month on any roof repair to the first five who will post a correct response. Remember I have to know who you are so make up a screen name and e mail me. An additional $25.00 if you become a follower. I started this blog at Ryan's request to help with our SEO but I've really had fun sharing my roofing life with people. If you've benefited from my experience then I ask that you join. We don't do any monkey business and won't bombard you, so don't worry. Anyway, don't feel pressured. It is not mandatory.)


On the up and up, your sins would be diminished by killing less baby birds with smoke inhalation. Maybe it won't effect your Final Judgment score card but you'll feel a lot better when the baby bats don't screech as they become emphysemiacs. It is I who am the sinner for not warning you that in fifteen years you'll have massive chimney problems. Maybe I did but who remembers.
If you don't fix the deficiencies that the evil builder left lurking in your future, your house will go on riot and it will cost you thousands rather than hundreds.

Fix the minor and the major wil

l not arrive.
This is the real cap or trade.
www.jonwrightroofing.com
Posted by The Roof Forum at 6:53 PM