When I started roofing there wasn't an Hispanic on the roofs. In my world of 1976 the flat roofs were put on by mostly black men and the comp roofers were crackers like me. Most were redneck but some were hippies. I brought a lot of college students with me into the trade who learned the importance of an education. This world remained unchanged until the middle 1980's when a lot of southern rednecks came in to do hot work. These were hard, tough men who worked hard and partied hard.
About 1987 the roofing world was pretty white bread but the rednecks were hiring some young immigrant kids as helpers. They knew or learned English pretty fast as there was no Spanish media or "epuje numero dos para Espanol." Everything was in English. Period.
I knew then that since every single helper in this apprenticeship system of roofing, except for those who went to the roofing university, was an immigrant then sooner or later it would not be necessary to speak English to tear off roofing, carry bundles up the ladder, and apply nails into shingles. We never really taught anyone because those who could not learn by watching were dangerous. Smart people use "monkey see-monkey do" and might surpass their exemplar if their minds have more plasticity.
Slowly I watched, or more precisely listened, as English left the roofs, the restaurants, all construction, television and radio, the neighborhoods, and for some time, the schools.
The smarter or more ambitious ones learn English. I already had quiet a good foundation in

Spanish and went to work like Bulls Eye: run like the wind Bulls Eye.
There are no college kids, red necks, blacks or hippies on the roofs anymore. At least not here.
Now don't let the title fool you. I'm not about to delve into religion except for this one statement: I do not believe in religious symbols on business cards, contracts, yard signs, advertisements, or anywhere.
Why? Because neither Abraham, Jesus, Buddha, nor Mohammad were roofers. The roof is a hot place and time is short. Now Jesus was the son of a carpenter and I'm sure he could make a chair but roofing is a subdivision of carpentry, not the other way around.
A foolish child is a father's ruin, and a quarrelsome wife is like the constant dripping of a leaky roof. Proverbs 19:13.
Just as the rain penetrates through the thatch of a leaking roof, so the 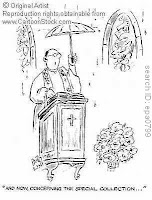 passions penetrate an unbalanced mind: Buddha in the Drammapada.
Those before them also plotted (against Allah's Way): but Allah took their structures from their foundations, and the roof fell down on them from above; and the Wrath seized them from directions they did not perceive. Quran.
Roofers aren't smart enough for politics except I have a degree in Political Philosophy. I'm here alone. Aristotle anyone?
Posted by The Roof Forum at 3:54 PM