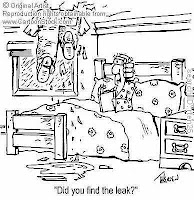 Remember those fiasco days when all the roofers were panicking about OSHA safety harnesses for residential roofers? We followed the rules and our roofers were ridiculed. The other companies roofers either didn't have the "fall equipment" or had it on their backs but didn't attach it to their anchors. The insurance companies were accommodating enough to allow us to charge more for the additional added cost of doing business. Our roofers put a surcharge on their labor.
Later the insurance demanded proof that we were using the equipment and when we went out to photograph them we found that they had copied the roofers who laughed at them but they still wanted the extra pay. All of those expensive devices, about $400.00 per man, disappeared.
Flash forward to 2010. Even though the fall gear requirement is gone, few roofers follow basic OSHA standards. Roofers can't drink from the same cup and all cups must be labeled with each persons name, no electrical tape on extension cords, knowledge of where the closest hospital is (911 will do as an answer), no painted or repaired ladders, and a first aid kit on the premises are a few of the top items needed.
Regular and documented safety training classes must be kept up.
This is the law. Do any of the roofing certification programs require it? No. Do any of the insurance companies that have preferred contractors require it? No! Do any of the trade associations ask about it? No.
Am I just wasting my time? Hardly. We haven't had a major accident in over ten years, and that was me. You know the pilot doesn't put on his seat belt when he's a passenger. Now I have a healthy respect and fear of the ladder.
So when choosing a contractor, ask if he has a safety program for his installers. 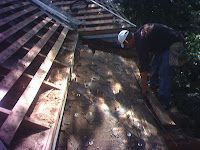 www.jonwrightroofing.com
Posted by The Roof Forum at 11:23 AM

Thanks to my father who informed me on the topic of this
webpage, this blog is really awesome.

Feel free to surf to my blog: where can you buy garcinia cambogia

Rooftop examination is an essential errand and it's important for each home. By assessing we will handle its issues essentially and may cure genuine damage. RV Roof Leaks Repair covering is that the best rooftop covering. Utilize this and discard rooftop leak for quite a while.