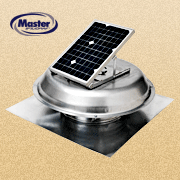 Most of the time the power vent fails due to either not enough NFA in intake or the thermostat failed. If my power vent quit working I'd first check out the thermostat. This can be done with a tool called an voltmeter. If the machine does not turn on when the temperature reaches the predetermined setting either the power is not getting to the motor, the power supply is cut, or the motor is burned out.
First see if there is electricity at the thermostat. If so, check and see it electricity gets past the thermostat to the motor. If not then the thermostat is broke. If there is electricity at the motor then you need a new motor.
Power vents can fail early if there a slight vacuum resulting from not enough intake. This makes the motor work harder in an already inhospitable environment. The NFA requirements need to be balanced which means if the power vent has 1000cfm you'll need 480 NFA intake. The 1250cfm motor needs 600 NFA and a 1600cfm model needs 768 NFA. You can have more intake but it serves no purpose and may even damage the air flow through a process called the Venturi Effect. Further away vents may cease to take in air making the area of the house under them susceptible to heat, humidity, and mold.
Gable end power vents have the same needs. The GAF PG-2 (power gable) has 1540cfm and needs 740 NFA and the PG3 with 1600cfm has the same needs as the 1600 power vent, 768 NFA.
Sometimes power vents are the best or only way to go. A home with an open cornish cannot be vented from below without cutting holes in the bird block, using Airvent's "The Edge," or cutting holes in the garage ceiling or porch soffits. Recently, in Irving, we put a power vent in the middle of a roof that had two gable end vents. The NFA requirements meant that we needed to add an intake vent on a third gable or shorten the service life of the motor of the power vent.
This week we'll be repairing a roof in Dallas. The home has no overhang. The fascia is the frieze board. I asked him how he vented his attic. He told me that he had two power gable vents on one end of the home, near the garage. Instantly I knew he had problems with replacing the motors and he confirmed this. I advised him next time they go out that he should put the new ones on the far side from the garage and increase the NFA by opening his garage attic access or putting intake holes in the garage ceiling. When he does replace his roof he can use the new GAF FasciaFlow. This only works if there is no overhang. Now he can get rid of the forced air system and use a vent ridge.
The greatest advantage to an active or power venting system using motors is at the end of the day. Passive systems, when properly balanced, work as well as power vents during the heat of the day and use no electricity. But the power vent will remove all the lingering hot air once the sun sets. Wallah, the attic is fresh right after dusk and not hours later.
GAF's solar vent has about 500cfm but their Green Machine is really cool. It is a hybrid so it can use electricity when necessary but will use the sun when it can.
Years ago we had a client in Richardson with passive venting and he had us to install a power vent and hook it up to a bathroom junction box. When he came home every evening he told me he went to the bathroom. He would turn on his light and the power vent would come on for a few minutes until he finished his business. We didn't realize back then that the vent would effect his passive system during the day by short circuiting the "Chimney Effect" he needed to keep air moving properly.
So when people ask me what is the best ventilation system I respond that they all are as long as it's the best for your circumstances. Plus, if you buy a radiant barrier deck you'll still need to vent. Humidity is still in the attic. The bathtub will still fill up if it is being loaded with water faster than it drains so an attic will get hot if all you do is reduce the load in of heat but do not provide for air transfer.
Venting is probably the most misunderstood part of roofing and that is why roofs fail before their time.
Jon Wright
Jon Wright Roofing
Posted by The Roof Forum at 8:24 AM