You never see a lot of slate roofs in Dallas. Those roofs are real old and will last a long time. Old East Dallas near White Rock Lake, Highland Park and University Park, and the new money of the northern communities of Plano and McKinney have a few. Those slate roofs will last for generations.
Ever since I became a roofing contractor in 1979 I've seen many attempts at fake synthetic slate and it always ends up the same way, belly up. Trash on the roof that has to be disposed of in the landfill. Many times people try another synthetically slate and again fall prey to the greed of getting something for next to nothing. These nothings still are expensive. And heavy! Knock your socks off, I mean squeeze them off, because they aren't coming off until the rubble that was your house is removed from your cadaver like Texas Stadium. By then the socks can be taken off your dessicated limbs. Enough of that. I apologize.
Is anyone unhappy with their Mercedes? Rarely. The same is true of slate. The only cost effective imitation of slate has been composition slate look alike such as GAF Slateline or Capstone. But they look like comp knock offs.
When these slate roofs need repair it is usually expensive because it is rarely done. Rarity equals exclusivity or dinero. These guys take T bills, Silver Certificates, Euros, or anything that has value.
The repair usually results from a flashing that wore out or a slate that cracked around the fastener. Most roofers have never even heard of a slate ripper, the tool of the slate craftsman. Did you hear that:slate craftsman. Nobody says that about the composition roofing people.
The other factor can be that the felt (black paper) has turned to dust.
The flashing and nails need to be of either copper or stainless steel or the slate will reject them like an incompatible organ transplant. Again, you can't get out cheap. Everything about this product is costly, but get ready because the cheap stuff has arrived, slate with no warranty from third world dictatorships. Try filing that warranty or taking Kim Jung Il to court. Can you say Secret Service?" This stuff is bad and bad inscrutable roofing warlords are peddling this stuff. It comes over on boats as cover for illegal drug shipments. That's about all it's good for, except for filling the landfills and insurance claims. 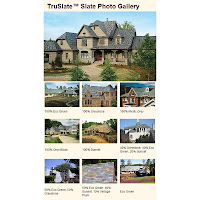 But we have been saved from the wasteland again by GAF with Truslate, a product with lifetime warranty backed by Good Housekeeping. This stone weighs a lot less too because the amount of slate required has been reduced by more than half, not by making it thinner, but by eliminating the need for redundant slate lapping really far underneath the two slates above each piece of slate. The selvage reduction comes from a polypropylene 1000 year sheet that is sandwiched between layers. Those inscrutable Chinese love that thousand year stuff.
When Henry Kissinger asked Chou En-lai, which is now spelled Zhou Enlai, so close why bother to change it, what he thought of the French Revolution, he responded "It's a little too soon to say."What the hell does that have to do with slate roofs. I'll tell you. The slate roofs of those French Revolutionaries and of Chou, er, uh, Zhou, can see a thousand years. For God's sake man, they're rock.
You might have to take them down and replace the felt unless you use the thousand year stuff. Hitler wanted to stay in biz a thousand years, a pittance for a well established Yen roofer. But he almost got the slate roofs wiped out. Dresden, new slate roofs, Paris, old... back to roofs.
These GAF TruSlate Roofs, if you by it from Jon Wright Roofing, come with a fifty year non-prorated material and labor warranty with a twenty year leak guarantee because, are you ready, we are SlateCrafters.
Remember the other problem with slate:the slate cracks around the nail? Truslate is not nailed. No, it's not majic. The slate is attached with hangers. It is hung. It can shake, vibrate, move with the see saw effect of foundation movement, because it is hung like a repaired slate. Replacement slate tiles are put in with hangers. They will last longer and if hail damages one, you can forget the slate ripper. You lift it out and replace it. It's too cool.
So we do all the extra weatherproofing and ventilation that you need to do to get the Golden Pledge warranty but instead you get the Golden Pledge.
Ventilation slate roofs can be done in the same manner as all other sloped roofs but TruSlate has it's own TruSlate Cobra vent ridge. Just like all slate roofs though you must use copper or stainless steal flashing or separate the metal from the slate with StormGuard or another leak barrier. Due to the longevity of slate roofing the ventilation becomes much more important. If the slate is in good shape in fifty years but the plywood is decayed it is like the dentist saying "the teeth are fine but the gums got to go." A pretty smile is always ruined by bleeding gums.
TruSlate has the equivalent of a class IV rating but it is not the UL 2218 because it is an organic product. The impact rating test for natural products is the FM 4473.
Slate is green. Keeps all the associated industry out of roof replacement. It protects the landfills. Did I tell you it is prestigious, beautiful, and nearly exclusive. It costs only half, yes half, and you, for the first time ever, get something great for little, but you better hurry while supplies last. we're selling slate in Irving to Rockwall, from Denton to Waxahachie. We've got estimates pending in DeSoto, Fort Worth, and small towns in west Texas.
Here it is folks. If you don't like roofers buy a TruSlate Roof and you'll never need a roofing company again.
I guess the cycle of bad imitation slate has been broken. No it hasn't because bad imitation, synthetic slate, and cheap slate will always be available because their is always that dude who will try to sell ice to an Eskimo or swampland down in Tallahassee or somewhere out there. We only work 'round these parts.
Can anyone tell me why Kaddefy became Qaddafi or Gaddafi? It doesn't matter because he'll never buy a slate roof from me because he'll never come to Texas.
Istanbul, Constantinople... no body's business but the Turks... now they have slate roofs.

Jon Wright
www.jonwrightwoofing.com
Posted by The Roof Forum at 5:35 PM