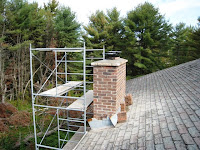 Here in the Dallas Fort Worth area I've been observing chimneys for a long time. It may not look like it but they are ready to pounce on you at any given moment.
When the mason, and not a Shriner, and not a beer, builds a chimney he starts with the flue. Fire brick, I hope, are laid up and the outer bricks are placed away from it to make the outside perimeter of a chimney. The void between them is used to clean up the job site. Broken bricks, bottles, cans, and mortar are used to fill up this gap until you've gotten somewhere about two feet higher than any roofing within ten feet. I'd go three for a better draw, not a Shiner, and some go two feet above the highest point.
Then comes the technical point. The mason searches the trash for the best plywood scrap and lays it over the top leaving the flue open. Then he dumps a big pile of mortar on top of that.
Yes Virginia, plywood. Yes Texas, plywood. Santa is supposed to get past this and we all know Santa has nailed on a few roof to keep from being sued for crashing into the roof.
Then Father Time comes in. The mortar pile, and that's not a cache of small hurling projectiles for the new Marine who joined yesterday, begins to crack up and sand starts to erode from the mortar.
In the summer, after a deluge, the ground can dry in a day, but in the winter it might take over a week. The same is with the chimney. Hundreds of gallons of water can remain suspended in the mortar for weeks.
The water enters fairly slowly so it doesn't matter if it's a hard rain or a drizzle. Slowly the saturation point is reached and for every drop in a drop must fall.
It never leaked before!
Now comes Old Man Winter. That suspended water becomes ice and H2O is the only substance I am aware of that gets bigger when it freezes.
The brick begins to spald. That sounds bad doesn't it? Bricks become cookies and those top rows have already come loose. Some brick are just gone. Algae is growing out of the mortar. We have an ecosystem. Birds, bats, bugs, and algae in predominately green but with brown, yellow, and black accents.
Now you've done it. No vacation this summer. If you can get a mason to come out at all he's going to charge a fortune. You see it's hard work on an incline and everything is messy, heavy, and hotter that heck. No less than three thousand dollars to put it back in the same ridiculous manner that the previous brick guy did.
We can rebuild it too and we charge a lot less but it would have been even less if you had taken the time to crane your neck upwards to see all the chunks of brick laying on the roof. Remember that thud on that windy night?
We just rebuilt the top of a chimney on the southwest corner of Brookhollow Drive and Annette Drive in Irving near our office in 75061. We repaired some decking, damaged white three tabs, and remove a lot of mildew from the roof also. We were able to supplement the missing bricks from inside the chimney. It had a honey comb type construction and you could see way down in it until the passageways or flues turned. He got out with the cap, three or four feet of rebuilding, various leaks, general roof repairs, and a beautiful "New style 2" for $1800.00. The work took two men two long days, materials, and driving all over Irving, Dallas, and Plano to gather up supplies.
A beautiful full (as opposed to that wimpy little thing in the first photo that does nothing in terms of waterproofing) hip roof chimney cap with bird screen to keep the smell of burning baby birds (bats too) is a lot less expensive. Hip roof metal caps really aren't necessary because, as I have been saying for decades, it'll never snow a foot here. See this beauty.

With time that little puddle on top of the cap becomes a mosquito basin. The cap rusts, the water leaks out. And you got rooked again.
What is it with you anyway?
The caps are relatively light and if you fasten it directly into the top courses the weight is not sufficient to hold it and the mortar cracks anyway. That cap is vibrating in the wind and therefore so will directly fastened anchors.
Did you ever notice that mortar, the non exploding kind, is brittle? If the mason built the chimney on a hot day and didn't compensate with fresh wet mortar, the process of erosion is even quicker.
The cap must be wired down with wires and anchors placed several courses down. The vibration of the cap, and humming of the flat roof cap, will be absorbed by the cap itself and the wires. Wiggling is better than breaking.
There is no such thing as a square chimney in Dallas, Irving, Richardson, Plano... anywhere...The sides can be out of square several inches. All faces must be measured, allowance for clearance made if the sides are bowed, mortar mounds need to be evaluated, and a general hmmmm... done before ordering the new cap. Then you need to transport it upside down with a ballast and roping system or it will go airborne on the LBJ on its way from Plano to Southlake. Don't worry, you'll know when it comes out. You'll hear horns, screeching, booms, sirens, and loudspeakers calling for you to get out of the car and drop to your knees.
I hate that part even more than not keeping a schedule and having to buy a new cap from the sarcastic fellow who fabricated it and told my salesman to secure it.
We haven't lost one yet. Knock on wood shingles.
The erosion further down the chimney needs to be addressed. If you use mortar to tuck point the holes you'll need to wet it until it drys.
Yes, I did say that. I also get funny looks when I tell people that soap makes water wetter, that glass is a frozen liquid, and that heat goes where heat isn't. sometimes I get them for no apparent reason and other times I give them back or just look dumbfounded. It's the sarcastic humming that gives me away.
Back at the ranch, where the partially repaired chimney awaits the return of the roofing roofer repairman that is acting like a pseudo mason, we are about to learn another lesson.
We re-counterflashed (spell check really hates that jargon) a chimney once and used mortar caulk to seal the metal flashing. Actually we've done it thousands of times from Garland to Aledo. Then my tech Thompson water sealed the entire chimney.
Rain came, as it will again some day, and the somebody had stole our mortar caulk. Mr Thompson ate it. He hates dry hard mortar caulk so we now wait a spell, like 24 to 48 hours depending on climatic conditions, to seal a chimney.
The advantage of mortar caulking is that it is more neatly applied, no wetting, brushing, mixing, and clean-up is needed. And it does a much better job.
In memorium, I had some readers call me up personally to complain that the last posting was flat and humorless. Let me tell you that this is not comedy central. This is a serious place discussing serious issues above your home and if you find something funny then you must be warped.
Let's get this straight. There is nothing funny about a leaking roof. If you have anything to say please post it in the comment section. It's lonely at the top. Hot too. We need to clean up this mess and go fix the next roofing problem.
Posted by The Roof Forum at 9:05 AM