The News According to Jon

I sincerely hope nobody is offended today but I'm going out on a limb today. My limb. Here goes:
Good morning boys and girls, or as they now say in some parts of the military, boys and boys. Now that wasn't so bad. One less thing to worry about. Plus the armed services have all that new closet space freed up. We have to do something because as we and our Ruskie friends send our bombs to oblivion, rather than the other way around (bombs send us...) the rest of the world seems intent on making up on the vacuum. Reminds me of the Tom Lehrer song "Who's Next." He's singing about bombs, not gays. In order of appearance: America, Russia, United Kingdom, France, China, Israel (come on, they just haven't blown one up yet), India, Pakistan, North Korea, and the sharing states of Belgium, Germany, Italy, Netherlands, Turkey, Canada, and Greece. Belarus, Kazakhstan, Ukraine, and South Africa gave them up. Iran, as we all know, wants only peaceful nuclear stuff as so will the Saudis and all their other neighbors. Chavez is going there and has missiles from Iran to put them on.
The real reason I got out of bed this morning was to read about the atrocity committed against Julian Assange: the newspapers leaked confidential police reports on the rape charges against him in Sweden. He did admit to having unprotected sex with two different women. What a genius. That should be a crime in itself.
That's when the Pope stepped in and said condoms were good sometimes. This definitely is not your grandparent's Pope.
I believe all the late night comics are obliged by codified law to delve into this one tonight. Assange, not the Pope, not the gay military, not anything else. Boy how military parades are going to change is an unforeseen outcome though.
Assange's protector, Michael Moore, also made his fame on exposé of secret stuff like war and money. What a shame that these two modern day heroes with impeccable records be treated with less respect than their collective peeking peckers deserve.
It's only common sense that if you're going to rape someone you might as well do it in Sweden where rape rates are through the roof and convictions are declining. Might even be good for tourism. I can see it now: come to Sweden and rape us. If you're famous, we'll just say it was bad sex. Just wear a condom and it's okay. I'm not joking here. One of the girls said she had let it go too far so she let him do it anyway and another insisted he wear a condom. Since the sex was bad, one of the girls went to the police and they determined it was a crime. Seems I remember a case in Austin in the 1990's where a Grand Jury refused to indict a rapist because his victim convinced him to wear a condom.
We put a lot of roofs on made of the same material. The double layer EPDM rubber roofs reduced the chances of two holes aligning allowing water to enter.
I bet our troops are forbidden entry to many ports.
I did it. You never know where the line is but you know when you've passed it. 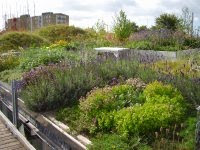 Back to the old boring Jon now.
Sweden has gone far on Green Roofs.

Great place to commit a crime. I wonder what they'll grow on the roofs in California. They'll be falling off because they'll be high.
What has this world come to when it's a crime to commit a bad rape and it's not rape when the victim doesn't want to get AIDS. I'm just too old to understand. My foray into the world of redaction has failed miserably so I'll leave you with this advice:
Come Saturday we're having a big birthday party. Everyone is excited and the ornaments are out. We all need to remember to give Him, our Lord, the best gift we can. That gift is yourself. Give yourself to Him and pray your soul to keep.
Merry Christmas to all.
Posted by The Roof Forum at 9:58 AM